This June, Mama Boots and I embarked on a road trip from San Francisco to Bend. Our first stop was the gem of Point Reyes National Seashore located only about an hour from SF! 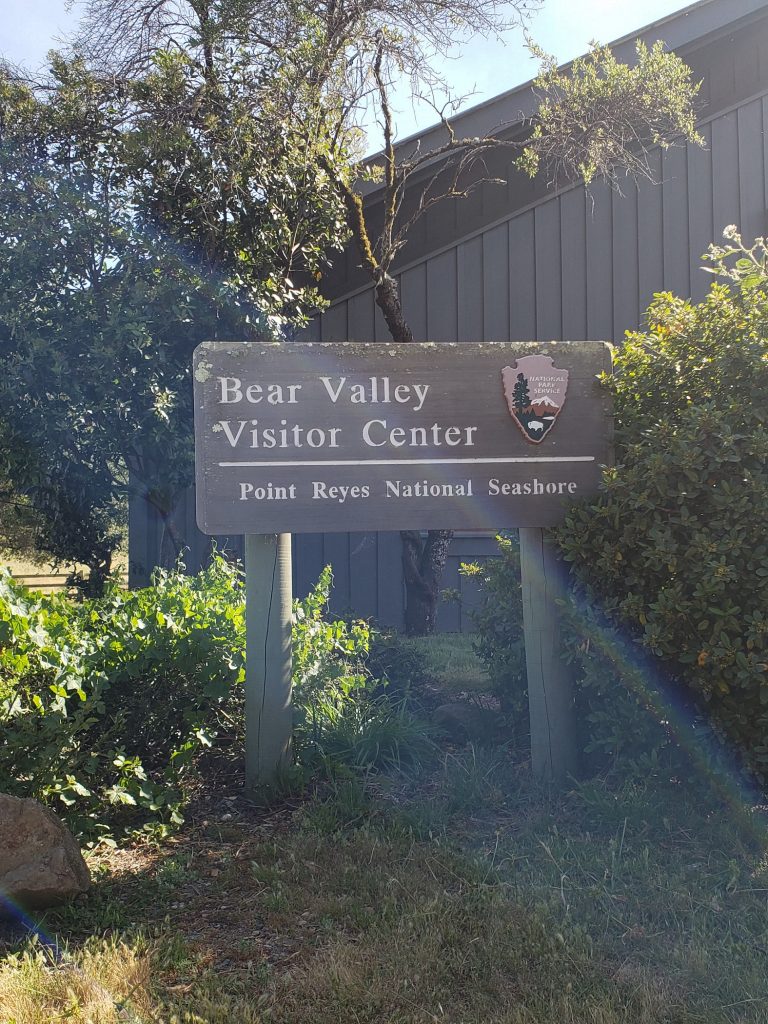 Given time constraints, we planned our visit meticulously. Sunday was the day after a 17-mile overnight charity walk for me, so we knew physically I’d be useless. We were also in the midst of a freakish heat wave with temps in the mid 90s! We drove straight to the main Point Reyes visitor center located near the town of Olema. There are a few small interpretive trails here in addition to the visitor center and tons of picnic tables. The visitor center had information, a gift shop, and some displays on wildlife in the seashore. We grabbed maps (and of course my NPS Passport cancellation), and I was feeling up to it enough to hobble along the 0.6 mile Earthquake Trail.

Point Reyes is located right along the San Andreas fault. While the Great 1906 Earthquake is most associated with San Francisco, the epicenter was actually right here, with extensive damage caused. Most famously, there was a fence that after the earthquake separated itself by 16 feet! There is a mock fence now to show this massive change. While there was no Richter scale then, it’s guessed the quake was at as high as an 8.0 on the scale. There are several interpretive signs as well as a fence showing you how the land shifted in the quake. The trail itself was paved and mercifully mostly in the shade and by a cool stream, which we weren’t the only ones to enjoy.

The next morning, we departed our Air BnB and hit the road for the one-hour drive to our intended hike along Chimney Rock (including an elephant seal lookout!). Cell phone and radio service here can be spotty at best, so come prepared with podcasts downloaded! Along the way are many charming towns which eventually give way to rolling hillsides. Remember those commercials about how happy cheese comes from happy cows, and happy cows come from California? We saw hundred of happy cows munching on grass and roaming around (with a few free crossings for you to keep an eye out for). The closer we got to the trailhead, the more vast and expansive the fields were.

We parked the car, stepped out into the heat, and immediately heard the unmistakable sound of elephant seals. The overlook is only 0.2 miles from the parking lot, and throughout most of the year, there are elephant seals to be seen here. May and June are prime time for adult males, according to the NPS website. We raced to follow the trail, and the gutteral unclogged toilet noises, to the overlook. And what an overlook! Close to us were tons of males, swimming and fighting in the surf, with the beach littered with dozens of napping females and juveniles. I had told Mama Boots to bring her binoculars, and they were worth every inch of luggage space, as was my camera with the zoom lens.

We could have stayed here forever. We were deeply envious of the happy cow mooing above the beach and the view that cow had. We both had to tear ourselves away to hit the trail, our delicate PNW skin already sizzling under the SPF. The 1.8 mile out-and-back trail to Chimney Rock is narrow and dusty with basically no shade. There are tons of cat trails leading off the main one, but many have signs warning you to stay away due to erosion. You’re essentially on a high spit, so erosion here can be deadly. There were a few spots where just leaning forward showed stunning beaches with more pinnipeds napping (see above). The water below was the most stunning blue. I kept taking panoramic pictures, hoping to fit all of the views in as possible. But really, due to being on a spit, the views were nearly 360* of cliffs, waves, and grass.

We walked towards the end of the trail, clearly marked by fencing keeping people away from the former end due to the risk of falling. There were two benches here so we took up a seat and our snacks, listening to the waves crash and more seals or sea lions swimming below. The water was such a crystalline blue that we could even see something bright orange amongst the rocks, either garibaldi fish or starfish. Again, we could have stayed here forever.

Sadly, we had places to continue on our road trip. If you are not on a time crunch, near Chimney Rock is the famous Point Reyes Lighthouse, a punishing trek with hundreds of stairs. The lighthouse is being renovated and expected to re-open in the fall of 2019. Alamere Falls is also a bucket-list of a hike further south in the park. I am already itching to go back to the park for camping, backpacking, hiking, sea kayaking, and more wildlife (including elk at the north end of the park!). Can I just live there?