In Winthrop is the famous Sun Mountain Lodge. Amongst other lodge-y amenities, the lodge offers some stunning snowshoe and xc-skiing trails. We decided to check out their snowshoe trails when in Winthrop for MLK weekend.

Our first stop, after parking at the lodge, was to grab our $5 day-use passes for the trails and take a look at a map. One pass is good for the day on all of the Methow trails, so you can really pack in a day here! Take note, the Sun Mountain trails are strictly no dogs allowed. The boyfriendo’s stepdad was confident on his choice of route, so we set off for the Kraule trail near the tennis courts.

As surprised as we were by the empty trails at Pearrygin Lake State Park, we were again surprised by Sun Mountain. The trails were empty, clean, and well-marked. Such a contrast from so many hikes and snowshoe trails close to Seattle! The sun was trying in vain to come out, but it was mostly minuscule patches of blue against a white backdrop. There were pops of color from pine trees, but other than that, just crisp white snow blanketing most things and pink tape hanging off a tree every so often denoting the trail. The trail was fairly well-packed down, as evidenced by what happened whenever we went off trail (the snow was nearly thigh deep!).

After a small bit of elevation gain, we were rewarded with some breathtaking vistas looking towards Winthrop and the Cascades. Bang for the buck, we were getting enthralling views for little effort! At the crest of a hill, we saw the View Ridge trail parallel to ours for a spell, which we were informed we’d be returning on. Then we went down, down, down into what felt like a canyon. There were a few intersecting trails here as we entered the trees, but our steadfast now-local advised us to continue straight.

With it being a relatively warm day for winter in Winthtrop (low 30s) the woodsy part had a few instances of snow falling off of tree branches overhead, but was otherwise pretty. We eventually emerged from the woods in a clearing. Here, we were at an intersection of the Lower Fox and Sunnyside trails, with us seeing tons of cross-country skiiers whizzing past huts and an area that must be for horses in non-snowy times. I had heard tales of the Methow warming huts and what a party they can be, so I gingerly stepped over the ski rails and went to investigate further. These weren’t quite warming huts, but the larger building had several picnic tables inside for those who packed a lunch.

We headed back where we came, this time turning right at the signed junction for View Ridge. We began to climb up, slightly less steep than our trek downwards, when we finally saw our first group of other snowshoers the entire weekend! We continued upwards, with a little spur just around the two-mile mark that led us to an overlook with a beaver pond.

The trail went further from the Kraule trail, towards a water tower and jutting outwards. Now, we had a breathtaking view of Patterson Lake (at the foot of Patterson Mountain, a hike I did previously). We knew we were close to the lodge, but it remained out of sight for several turns and minor elevation changes. However, the sounds of other people grew louder and louder until we saw the lodge just behind some people sledding. We crossed their designated area (well-marked to keep non-snowshoers off the packed-down trail) and circled back to where we started, almost exactly three miles total. A beautiful, easy trail that was empty on a holiday weekend: they do exist!

Distance: Over 12 miles of snowshow-only or mixed-use trails–choose your own adventure! Our 3 mile loop was perfect.

Elevation: The loop we did was moderate in elevation gain, other trails may vary.

Parking: We easily found parking at Sun Mountain Lodge. A $5 day pass is required for trail use; those under 18 or over 75 are free. NO DOGS ALLOWED.

Bathrooms: The Lodge is your best bet.

Best Beer Bet: The Lodge itself has some beautiful bars, or in town is Old Schoolhouse Brewing and the Methow Valley Ciderhouse. 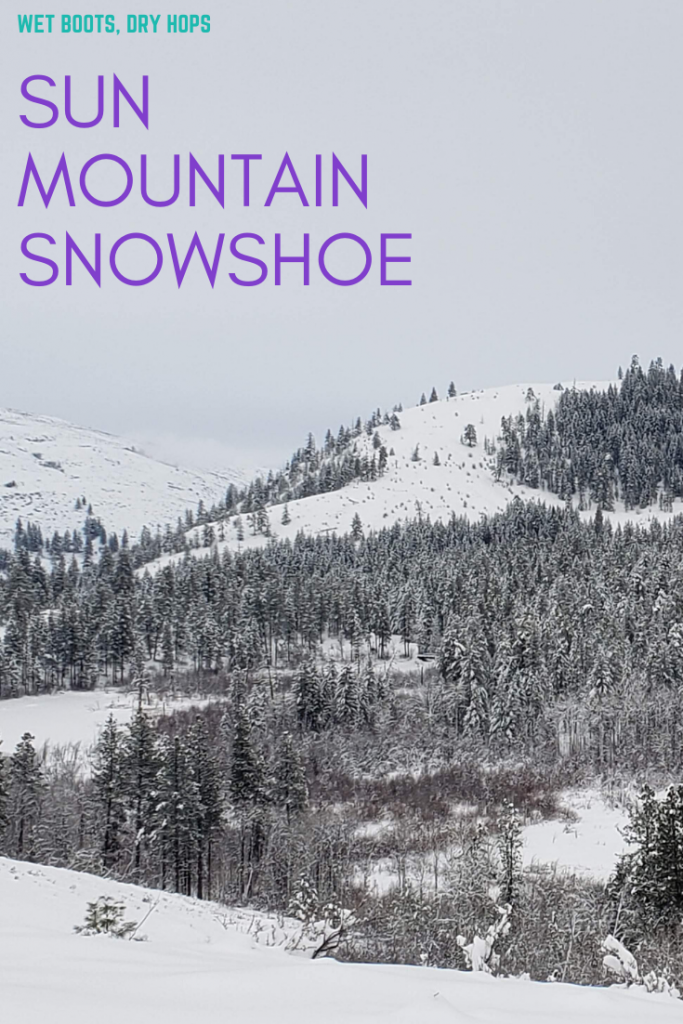