With summer appearing to approach it’s final weeks, the window to hike in some areas has been rapidly closing (even before the smoke set in). To I-90 for possibly the last time in 2020 I went!

Having not been to the gym since early March and having taken four months off from nearly all physical activity, I am still not in great hiking shape. For Labor Day I wanted something close and not too challenging, so we picked Rachel Lake along I-90. It made the ’98 list of 100 Classic Washington Hikes and unlike previous years, the road to the trailhead was supposed to be in pretty good shape! What’s not to love?

Well, this hike does have an interesting mix of flat and steep–don’t be fooled by the total elevation gain, but check out a profile of it. Also, the bugs there can be legendary, even by Washington standards. Throw in the historic crowds on so many hikes in the area and it wasn’t exactly a guaranteed walk in the park. We opted to get an early start to beat the crowds. We made it to the trailhead (the road was fine for my sedan, just a few dicey areas on the 4-mile unpaved road) a little bit before 8am and easily got a parking spot.

You have to self-register even if day hiking at the trailhead booth–please take the time for this, as it helps allocate funds to go where they are most needed in the massive Alpine Lakes Wilderness. I was under the belief the trail was mostly flat until it wasn’t, but you actually start with a an uphill right away. Soon you will join alongside Canyon Creek, which you will stay close to for most of the hike.  The trail vacillated between uphill and flat for a while here, but between the trees, the creek, and the giant boulders spread out, it was nice and cool. This first mile or two was also surprisingly overgrown with berry bushes and devils club in places, reminding me of the Queets (but you’ll be safe in shorts here). 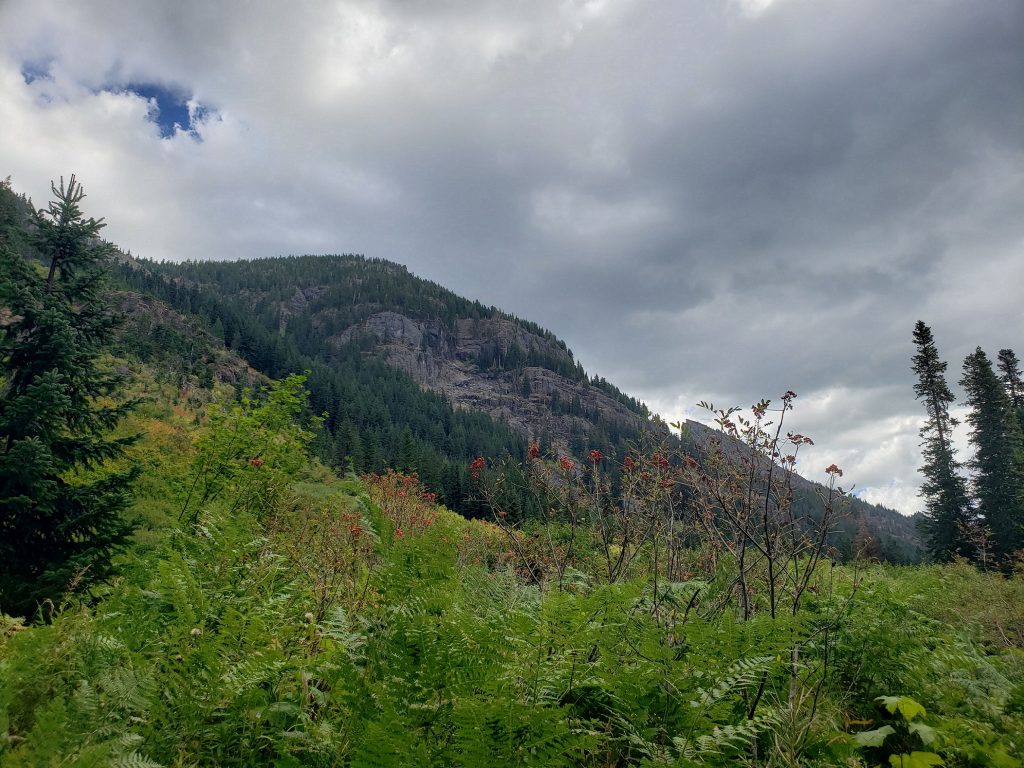 There was mostly thick tree cover in this first part, but one spot opened up and let us admire the Cascades around us. It was a nice bit of openness, but as you are east of the pass, on some days I am sure this open area can be unbearably hot. We returned to the trees and started having a few muddy areas and small crossings.

At 2.3 miles, you are at an official crossing of Canyon Creek, and the trail will officially change–the climb will begin! It is quite literally all uphill from here (WTA says 1200 feet in the next mile). Besides being steep, the remainder of the trail is somewhat narrow and filled with rocks and roots. We lost the trail once each way, but nearly all confusing places had logs piled up to block off any areas not actually part of the trail. It’s also still very muddy in places, making it dicey in places even with it being hot and dry for days. I couldn’t imagine doing this trail in the rain! As this hike is actually east of the pass, it was also super dusty, which combined with the bits of mud meant laundry when we got home.

The climb was not great, but I was thankful we had beaten the crowds there, as there wasn’t a ton of room to pass. We started to see more and more backpackers headed back down. Despite the steepness, this is a popular backpacking destination as there are multiple spots to camp. The climb itself is fairly unremarkable other than one respite near a trickle of a falls.

The climb continued from here, with a teasing peek here and there of spots clear from trees. We took many little breaks in the shade to catch our breath, and Marissa kept her eye on her map to see just how much longer we had. Finally, we reached what she assured me was the final hill.

And it was! We popped up to a flat space and a junction, with toilet and trail signs to our right. We headed left, hoping to get a nice lunch spot that was somewhat shaded. We didn’t have to go far to find the perfect place.

It was a beautiful alpine lake, complete with clear water in varying shades of blue based on depth. It was a surprisingly flat area we were at, almost beach-like, and there were some backpackers finishing morning swims before breaking down camp. Had I been wearing shorts or brought sandals I would have waded (and were it that much hotter, swam), but we were content enough with our snacks and trail beers and the occasional breeze. I had heard the mosquitoes at Rachel Lake were horrendous even by Washington standards, but we spent most of our break dodging yellow jackets, with nary a mosquito seen or any bites on me after (a Labor Day miracle!).

Marissa had really wanted to push on trail a little further to get some shots above the lake, so we re-applied sunscreen and followed the trail sign we saw earlier. This is how you continue to Lila or Rampart Lakes, if desired. There is 600 more feet of gain from here with more than a mile remaining to either destination, but we were content to only go partway until we got to a viewpoint, with sights of the crystalline blue-green waters as we climbed made all the worthwhile. We had a big talus slope on our right as we climbed, with a pika chirping to keep us company. Belly full of beer, I was hoping for not too much more climbing, so when Marissa said she found a lookout, I was more than happy to stop there. How could I not be?

In case that’s not enough to convince you to go further, the views from up high weren’t just of lakes! It’s a shame I did do this hike when out of shape, as last year I’d have easily continued on to the other lakes. But knowing I had to leave something in the tank for the steep downhill home, I got my poles out, tightened my laces, and we headed down.

By now, there were a lot more people on the trail (interestingly enough, the dayhikers were far more likely to be masked than the backpackers) and finding places wide enough for one to pull over got tricky in some places. I was glad to have my poles, but Marissa was doing just fine without them, so the choice is up to you. It certainly was a quad-burner on the way down, but the sun had disappeared behind some clouds, so at least we weren’t covered in sweat. Little did we know what was starting to happen all over the state as a breeze picked up–had we started a few hours later we’d have been engulfed in smoke on the way down. Thankfully, we just had dark clouds above us. The miles piled on, with the 2.3 miles remaining once it flattened out feeling more like four. My out of shape feet protested the entire last mile, but we made it to the car, sweaty, dirty, and happy.

I’d love to return on this hike again, potentially for an overnight. I’m a sucker for any alpine lake, bugs and all, and also love a backpacking destinations with multiple options. I can see why this hike made the ’98 list of classic Washington hikes, but know I was lucky to have escaped with no bug bites, only dirty ankles and a dirty car. I’ll be back, just hopefully in better shape.

Distance: 8.0 miles RT to get to Rachel Lake according to WTA. From there you can tack on more miles to get to Lila Lake (11.0 RT) or Rampart Lakes (also 11.0). Rampart’s trail can get confusing, so a map or GPS can be handy.

Elevation: 1600 feet of gain to the lake according to WTA (1902 according to my Runkeeper); more elevation if pushing to Lila or Rampart Lakes.

Bathrooms: Pit toilets in parking lot and an alpine toilet at Rachel Lake (unsure if more at Lila or Rampart)

Fires: Not allowed at this elevation.

Best Beer Bet: Dru Bru is right along the way home, or further west on I-90 are No Boat or Snoqualmie Falls Brewing.